Having a clean office is important for more reasons than simply looking organized. A clean office opens the door for higher concentration, increased self-esteem, and happier employees. A clean office doesn’t happen on its own. Keeping an office space tidy is a collective effort from all employees and can be an efficient system if there […]

Whether you’re looking to upgrade the look of your office or start completely from scratch, you need to have a plan about the office experience you’d like your office to portray. For many businesses in this day and age, that experience often revolves around open design. If you are looking to create a new, open […]

Creating a workplace that fits the needs and wants of the company can be a challenge. But whether you decide to put your creativity to use when furnishing a new office or contact a team of designers, the end result is always the best part. If you need assistance, Corporate Office Installations is at your […]

Essential Office Cleaning Tips and Tricks [Checklist] It’s the start of a new year and I think it’s safe to say that everyone is ready to press that refresh button. In the business world, the new year means that employers are laying down the foundation for this year’s new company goals and office employees are […]

What do Pixar, Mindvalley, and Google all have in common?
Sure, they are all titans in their perspective fields. They are also notorious for their vast amounts of employees who constantly create new and engaging content every day.
But do you ever wonder how all these employees are able to continuously pump out creative content while still technically working the 9-5 grind?
Constantly calling upon creativity is both exhausting and intimidating. The pressure to perform in these seemingly intense environments is not to the weak of heart- especially in a world where ADHD tendencies are found in most people.
How do they do it? How do they stay focused, inspired and creative day in and day out while also increasing productivity every year?
They don’t have a crystal ball telling them what trends are in the near future. They don’t have a Muse locked up in the basement forever feeding them inspiration. And they don’t have superpowers that allow them to tap into their creative juices whenever they please.
They are human, just like you and me. Humans that suffer from things like writer’s block or brain drain. 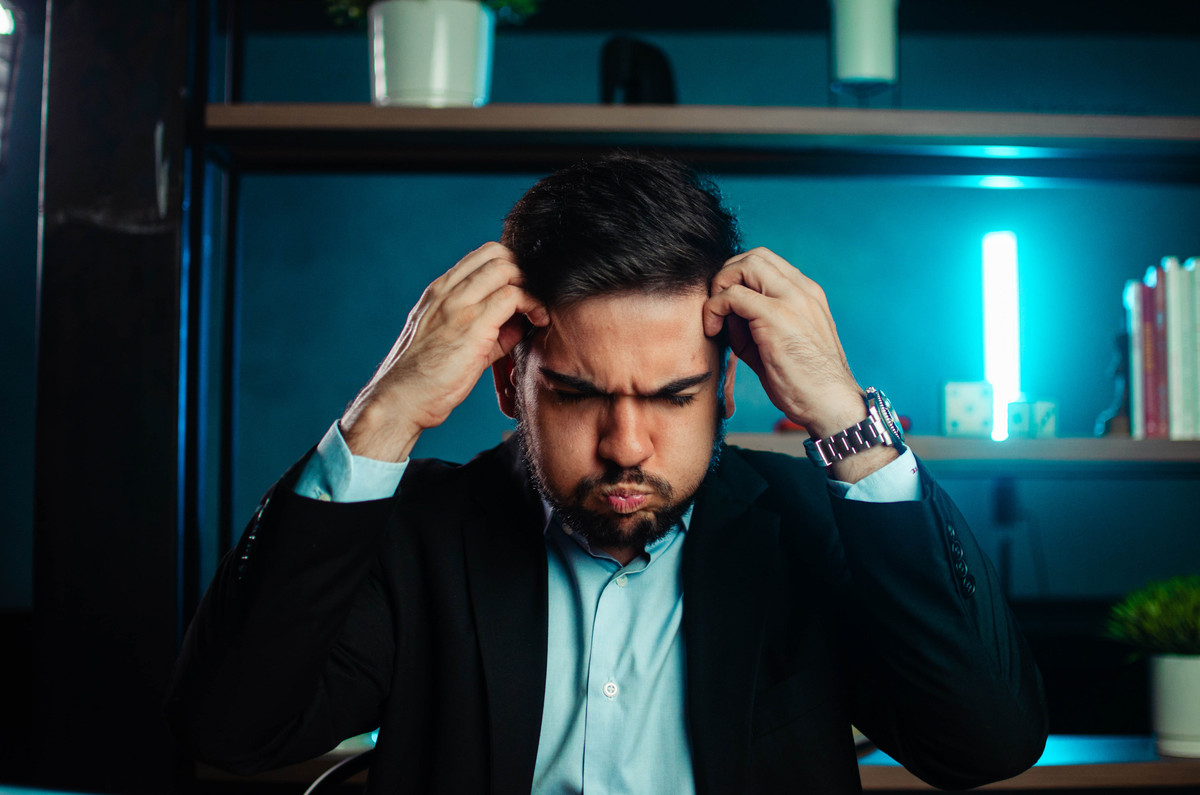 But unlike many employees, the CEO’s of each of these corporations have found the secret to keeping their teams excited to come to work, focused on completing products, and encouraging innovation everyday.
So, what is this secret recipe for inspired success? What are they doing that other companies could learn from?
I’ll tell you. A major factor that’s easy to implement into your business is Spatial planning for increased productivity.
What does that mean? 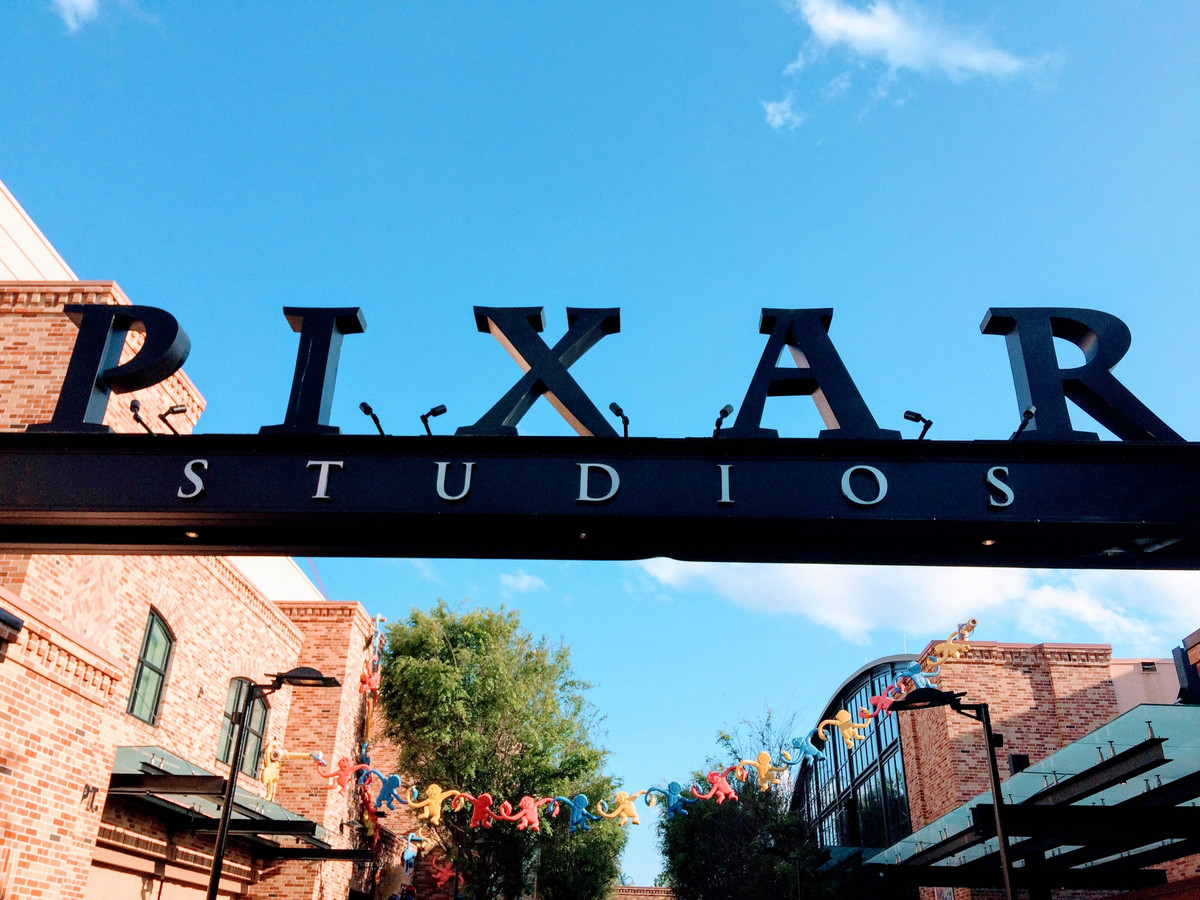 When Steve Jobs designed Pixar’s headquarters, he had one thing in mind when it came to the success of his business.
Collaboration
Collaboration doesn’t happen when employees are confined in their cubicles. Collaboration happens when employees gather.
The main idea behind Steve’s idea was that instead of separating all his animation departments, he would place them all under one roof… as well as optimizing his space for creativity.
He felt that if he created areas where people would run into each other organically, there would be a cross-pollination of ideas which would lead to optimized creativity.
Well, he was right.
Steve Jobs filled Pixar studios with staircases made of glass for beautiful views. An amphitheater, basketball court and other leisure areas for staff members to decompress, take a breath, then be able to go back to fully focused work.
It worked so well that Pixar would soon be known for their Brain Trust system that is notorious for “removing the power structure from the room” which allows everyone the confidence to share their opinions, thus leading to the best possible production of whatever product is currently being reviewed.
People started to enjoy going into work and being heard. When people know they will be heard, they become excited to come up with new ideas to share. They developed collaborative relationships that increase productivity because ideas are free to fly out in the open.
Corporations all over the world would soon follow Pixar’s lead and began the reconfiguration of office space– utilizing any office in a way that would allow for ideas to be shared.

For those who haven’t discovered Mindvalley yet, it is a company that focuses on “personal growth, wellbeing, spirituality, productivity, mindfulness and more – and [then] combines them with cutting-edge sophisticated learning technology.” Mindvalley has a HUGE global presence primarily through their website, podcast and app. They even have motivation gurus like Tony Robbins and Tim Ferris frequently keynote speak at their events.
The company has over 200 staff members who Vishen Lakhiani, founder and CEO describes as “innovators, artists, technologists and dreamers.”
With headquarters in a beautiful place like Malaysia, you would think that the scenery would be enough to keep people inspired and happy to work. However, Vishen Lakhiani desired more for his team. 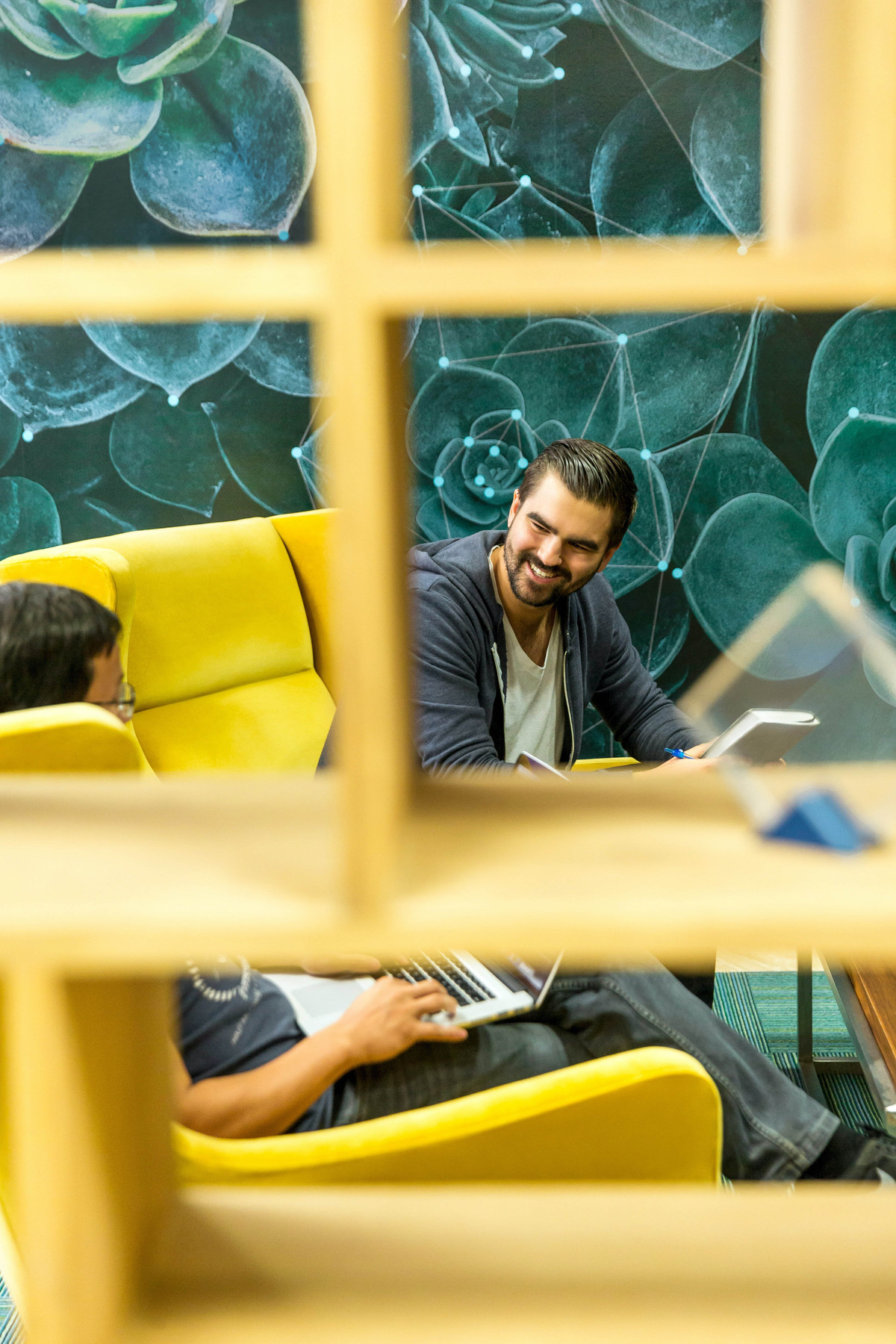 Because of the nature of Mindvalley’s education systems, Vishen understood that the psychology between employee work and productivity went hand-in-hand.
If his employees felt safe to share and collaborate, if they could be excited to show up to work because they could feel as though they are part of a “we” not a “me,” their overall happiness would greatly approve.
The funny thing about being happy at work is that an increase in productivity usually follows. People want to grow and do better, be better.
So Vishen took a page from Steve Job’s book and created a workspace that allows his staff the freedom to express, share, and collaborate with each other. It allowed the freedom to explore and innovate which are the core values of his company.
He hired a design team that would lead Mindvalley to be rated one of INC Magazine’s top ten places to work.
You know what other big name out there followed this example?

Google may be the number one search engine used by well… everyone. But have you ever thought about what their headquarters look like? What do the employees of Google walk into every morning? What fuels their motivation day in and day out?
You guessed it!
When you walk into a Google office, you’ll find that some of the headquarters around the world have slides, rock climbing walls, and video gaming rooms. 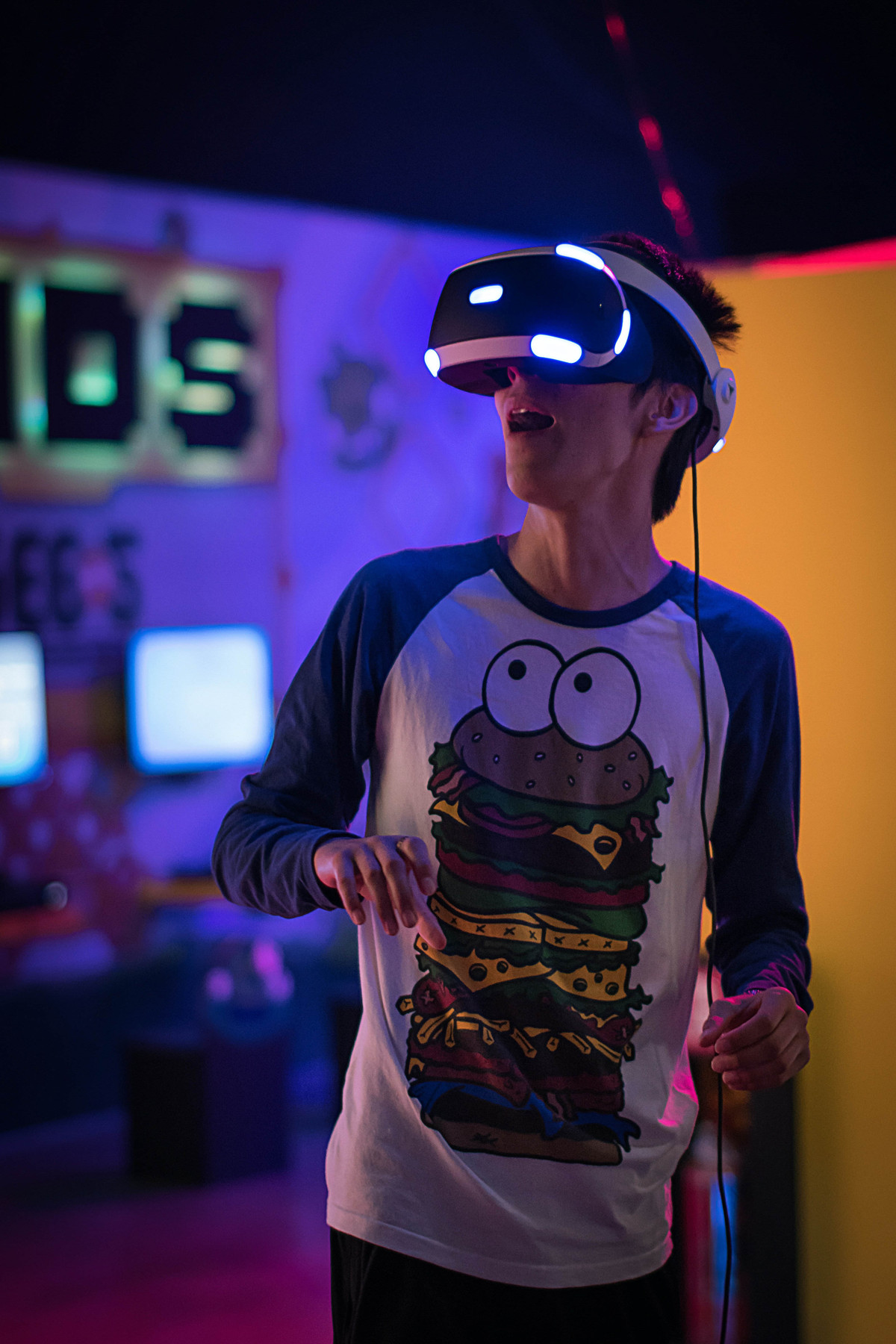 People are encouraged to play pool with each other during work hours to bounce ideas off of eachother.
Walls are filled with color and spaces are specifically designed to give employees options for optimization and calibration.
Google places an emphasis on play at work, not just because they want to be “fun.” Work doesn’t need to be “fun.”- but it does help.
The reason behind allowing employees to “play” at work is actually to increase focus. Productive work does not mean that employees are sitting for long periods of time behind their computers.
It’s an unrealistic expectation to expect a constant flow of work all in one sitting. People get burnt out and the quality of work produced begins to suffer.
Studies have shown that taking regular breaks from a singular task can actually increase productivity.
By taking regular breaks, your body and brain are able to reset and give you the focus needed to complete your task at an optimized level.
Which is why giant corporations have adopted and even encouraged their staff to play. They’ve designed spaces to day dream and, in fact, enabled distraction by adding decorative walls and random geometric shapes.
By giving permission to relax and to unwind, people return to their work with new ideas, new perspectives, and a refreshed mind to refocus, leading to better quality and increased productivity.
Looking to give your office space a little of the magic that these corporate giants share?
You may not be able to completely redesign your office space, but if you are looking to freshen up your team’s enthusiasm and increase productivity, reconfiguration may be the answer for you.
Have no idea where to start?
COI is ready to step in and get the job done! Reconfiguration can be tricky, but you can make any office space more economic with the right planning.If you are looking for ways to innovate your office space to increase productivity or even just to boost morale and inspiration, give our team a call.

Many offices opt to use cubicles for a variety of reasons including their many positive aspects and ability to flexibly layout your office. Whether you are a quiet, serious business or a chatty, outgoing office, cubicles can help you and your office space. Social Distancing As a result of the COVID-19 pandemic, strict social distancing […]

Whether you are in your office or working from home, it’s fun to spice things up for fall. Whether you’re just making it smell good or decorating for the season, it puts everyone in a good mood and can boost productivity throughout the office. When visitors come in they will be impressed with the office […]

Moving your office space is no small deal. Dealing with large furniture, sensitive electronics, multiple rooms of items, and an entire staff of people on limited time can lead to undue stressors. In fact, three quarters of all small and medium sized businesses actively delay moving due to the stress it could cause. We’re here […]

As many people have been forced to work from home, being productive in your own space can be difficult. Your home was once a getaway from your work environment, but now it may be taking over your space. Taking control of your own space can help eliminate distractions so you don’t let your work get […]